After observing and logging a session, you may want to have quick access to video of the session. Because Morae records using RRT, the resulting video file (RDG) will only play in Manager or the Morae player.

Create WMV File During a Session

You can save a WMV file during the recording session. To do this, check Save session as WMV when connecting to Recorder from Observer and select a location to save the file. Saving a WMV does not affect the RDG file.

If you mute the audio on Observer during a session, the audio is still recorded in the WMV. 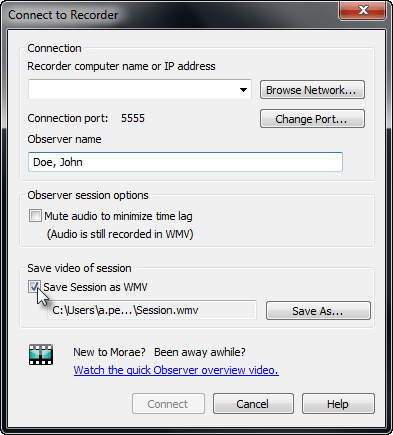 After recording a session, you may want to covert the RDG files to an AVI or WMV file.

To convert a recording to AVI or WMV: