When beginning the filming process, there comes a lot of preparation before hitting the record button. You need to find a set, adjust lighting, and have the proper camera angles.

One way to organize this preparation is with a shot list.

Want to learn more? Our free TechSmith Academy course,  Basics: Using a Shot List, will walk you through the process. Plus, download your very own shot list template!

A shot list is a document that maps out exactly what will occur and what will be used in that particular shot, or scene, of the film.

It serves as a detailed checklist that gives the video a sense of direction and prepares the crew for film expectations.

Shot lists are helpful for bigger productions that need shots at multiple settings or features several actors. It allows directors to organize their thoughts before filming begins and starts to form a shooting schedule.

Below is an example of a shot list template: 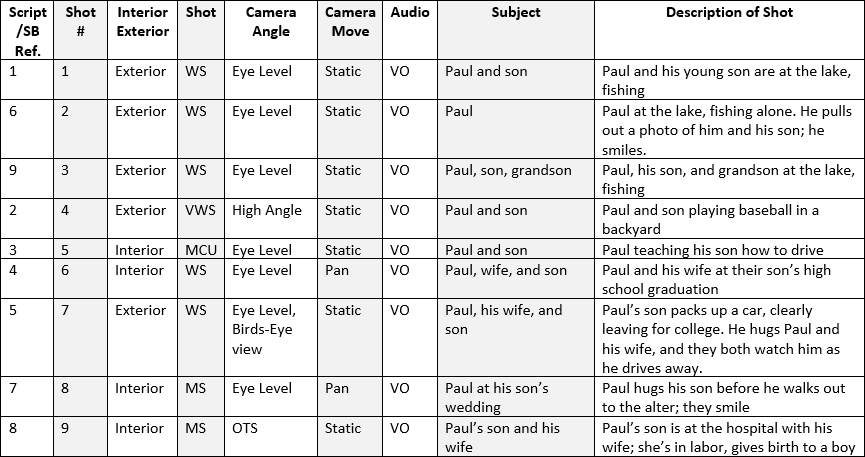 Begin by organizing your shots based on the shot location. Grouping similar shots makes it easier to shoot because you are able to film everything you need at one given time.

It’s important to note that this may not necessarily be in order of shot number.

For example, if you’re going to shoot a scene at a lake for the beginning and end of the video, you want the shot list to show all those shots.

Even though you will not be filming in order of the storyboard, this makes filming much more convenient.

Next, decide what kind of shot you’ll be filming, such as a wide shot (WS) or a close-up (CU). In addition to the type of shot, the camera angles and camera moves should be specified.

Angles may include a high or low level, where a move may be on a handheld camera or on a crane. Once you’ve decided your camera work, it’s important to address how you will be picking up the audio, may that be through a boom mic or a voice-over.

Refer to the chart below for more shot types, camera angles, camera moves, and audio.

Next, identify the subject of your shot, which is considered the focus of the shot.

A subject can be an actor, a group of actors, a prop, or a setting that is focal to the shot. Adding the shot description gives directors a clear guideline of what is happening in the shot.

This can include the actor involved, the action they are taking, the props involved, and what exactly the camera will be capturing.

Now that you’ve mapped out the direction of your video, you’re ready to start shooting!

Once you’ve captured your shots, it will be time to start putting them together and building your video. In case you’re in search of a video editing tool, TechSmith Camtasia is an easy-to-use option. Download the free trial to get started today!

Want to learn more? Our free TechSmith Academy course,  Basics: Using a Shot List, will walk you through the process. Plus, download your very own shot list template!

Global Content Strategy Manager at TechSmith. I play a lot of golf and watch a lot of football.