Today, companies rely more than ever on images and videos to provide instructions and deliver information, and to communicate with customers and employees. This development is driven by the advantages of visual communication as well as the changing expectations of the market itself.

A recent study by TechSmith showed that 67% of test participants understood & performed tasks better when the instructions included text with images (screenshots) or video compared to plain text; and another study by Hubspot showed that video is the format demanded the most by users.

As content creators develop more visuals to be used in their documentation, training and marketing content, a challenge is growing in the industry: Keeping those images and videos up to date.

The speed and number of release cycles is increasing rapidly and product updates are requiring more frequent updates to all visuals. Many departments struggle to keep up with this time consuming task and it is time to explore some established techniques for updating video content.

(Techniques for updating images and screenshots are discussed here in a different article).

Simplifying the process for updating video content starts with the planning of the video itself.

The content can be structured in a way that facilitates any future updates while it should be designed to reduce the actual need. need for updates.

When changes are introduced to a software interface or workflow, for example a new dialog, it is often only a section of the pre-existing content that is affected by this change. Tying into the principle of intelligent content and microlearning, video content can be designed in shorter blocks or scenes that are then linked together. Oftentimes, these blocks can stand on their own and are not dependent on the previous or following micro-content.

Imagine a basic software tutorial consisting of a title clip, two feature highlights, and an outro.

If an additional feature needs to be explained, a newly created clip can be inserted in between the existing scenes using your video editor.

First, one should therefore ask themselves: Does existing content even have be updated to still be effective? Depending on the audience and goal, content designed for a previous version might still be relevant. More often than not, elements that are insignificant to the actual information one is trying to communicate are the factors that become out of date.

By generalizing some of these elements, one can often prolong the re-usability and shelf-life of content. Imagine the following beginning to a video tutorial:

To start a screen recording in Camtasia 9, click on the Record button.

To start a screen recording in Camtasia, click on the Record button.

By purposefully leaving out the version number in the second example, the video content can likely be repurposed for the next version of the Camtasia software without causing user confusion.

Amy Rottmann and Salena Rabidoux offer additional advice in their article to increase reusability of content, such as referencing years instead of time passed (2016 vs. 2 years ago) and choosing a more generalized title for your videos.

And according to video marketing platform Vidcredible, creating evergreen content and keeping it up to date is also a great approach to increase SEO and traffic coming from established content.

At TechSmith, we’ve been using a design technique known as Simplified User Interface (SUI) for some of our video content. SUI has many advantages, and by representing software interfaces through a simplified visual representation that focuses only on key elements, content creators can create videos that require less or no effort to update.

The same SUI content can often be used across multiple versions and languages, decreasing the overall need to update content.

Edit in a way that allows you to easily revisit the content.

There are several techniques that can help to make updating an existing video easier.

Simply keeping a finished MP4 video file doesn’t offer the flexibility to make adjustments to a video at a later point. It is best practice to archive the actual video project in such a way that it can be re-opened and re-edited at a later time by yourself or a colleague. This includes saving the actual project file used by the video editing software, as well as all all recordings, images and audio clips that are incorporated in the video.

CAREFUL: Simply saving the project file is often not enough; as most video editors only reference the actual media clips used in a project. These media clips need be archived as well.

TechSmith Camtasia includes a handy “Export as Zip” option that will bundle the project file and all media together into a single ZIP file that can easily be stored and re-imported at any point for such purposes. 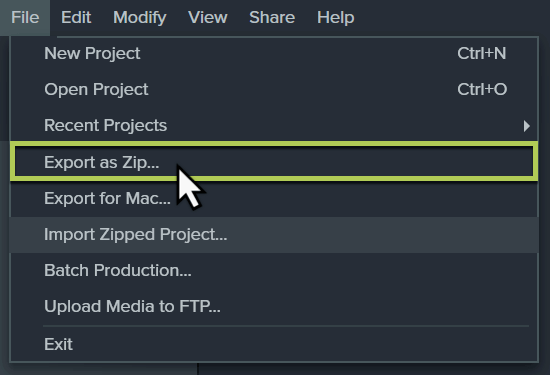 More information on managing recordings and project files in Camtasia can be found here.

It is also recommended to store any supporting elements, such as scripts, storyboards and image source files that relate to a project for later reference.

In many cases, either the audio or the visual portion of a video need to be updated, but not both. Keeping the audio and video content on separate tracks allows content creators to replace or change just one element without affecting the other. Many multi-track video editor offer an option to separate audio and video clips if they are initially combined on the timeline.

Fix a section with an overlaid screenshot

Screenshots can often be used to mask a small visual change in a screencast. Positioning and sizing the screenshot to the right area does require some practice (and a multi-track editor such as TechSmith Camtasia), but it is usually faster and more effective than recreating an entire recording. Keep an eye on the mouse cursor in your video to make sure that your screenshot does not cover it.

Example: The “background fill” properties are added to an existing video by overlaying a screenshot.

The video hosting platform you choose can also have an impact on the ease of updating content. Many companies host and distribute their finished video content through online video platforms such as YouTube, Wistia, Screencast.com or Vimeo.

While each platform has its strength and weaknesses, the most critical feature to look for in this context is the ability to replace a video after it has been uploaded without changing the URL.

This feature allows content creators to replace a video in the backend without breaking any of the shared links and embedded instances, making version control much easier and ensuring that anyone with the link will always and only see the latest version. Vimeo, Screencast.com, Wistia and others currently offer such functionality, but YouTube does not.

We have recently seen great advances in the field of voice generation technology (speech synthesis) and its quality is getting better by the day. The voice-quality of services such as Polly by Amazon, IBM’s Watson and Microsoft’s Azure services is impressive and affordable. As an advanced practice, content creators can leverage this technology to generate the audio voice overs for their videos instead of recording the audio themselves or hiring an expensive voiceover artist. This method is particularly helpful when updating video content: Any subsequent changes in the video voiceover can quickly be generated with a few clicks. And, unlike a human recording, the tone and voice of the new snippet will match the existing content perfectly.

Despite it increasing quality, the available voice generation technology is not yet perfect. It still sounds a bit robotic and lacks the required emotion needed for marketing content. Further, any unique terms such as brand names are not supported by default. However, the technology can certainly be acceptable in documentation and training content and already offers many advantages for creating, updating and localizing content.

Updating video content is an unavoidable challenge, particularly as the amount of content and the frequency of product releases increase. Video creators can prepare for this challenge by incorporating the need for later updates into all stages of their video process. Using the right design, organization, editing techniques and technologies can greatly reduce the burden of updating videos. This, in turn, keeps the video strategy agile and frees up valuable time for other projects.

Anton Bollen is TechSmith European Evangelist. Based in Berlin, he works directly with many customers and helps to ensure their success with TechSmith products. Outside of work you will find him solving Rubik's cubes, brewing beer and spending time with his family.